Thousands of families visiting adventure playground foodbanks across the capital this week will be picking up parcels of joy along with their food staples thanks to the capital’s leading play charity. 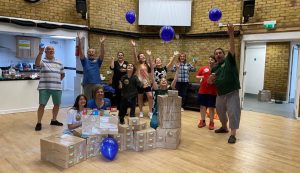 London Play has devised the emergency Play Parcels to alleviate the suffering of children who have been denied the simple opportunity of playing with their friends for three long months. On Sunday the team dragged in family members to help with a day of furious packing ahead of deliveries to the four corners of the city.

Although the explosion in food poverty is a widely-recognised consequence of the coronavirus pandemic; play deprivation is the less visible tragedy for the capital’s 1.8m children. It is a mental health crisis in the making, says London Play director Paul Hocker:

“Play is not frivolous. It is how children understand the world and it is essential for their health and wellbeing. At times like this, they need to play more than ever.”

Many children are not yet back in school; playgrounds have been closed for over three months and social distancing is still in place. For the 37 per cent of London’s children already living in poverty prior to the lockdown, or the 22 per cent living in overcrowded homes, the deprivation is even more acute.

The parcels include a unique deck of 52 playing cards produced by the team at London Play, each describing a game or activity to be played at home or even over the phone with relatives or friends. Small and simple props to support the games they describe, such as chalk, balloons, drawing materials and minifigures, are included in the box.

The 2,000 parcels will be distributed this week to families most in need via adventure playgrounds and food banks. Most of the capital’s 80 unique adventure playgrounds are located in lower income neighbourhoods where children are most likely to be suffering the worst impacts of the pandemic. These safe, staffed community hubs have been forced to close their gates for play, but many have risen to the challenge presented by the pandemic and are distributing food and more for people in need.

Kate Ferguson from Hayward Adventure Playground in Islington said that the play parcels will be delivered with weekly food deliveries to families who had been unable to attend the playground during lockdown. She said:

“Thank you so much to London Play for these incredible play parcels for families that usually attend KIDS Hayward Adventure Playground!

I know many of the children are excited to receive them already. As an adventure playground for children with special educational needs and disabilities, we have been working with much smaller groups of vulnerable children than usual throughout lockdown due to government restrictions. Therefore there are so many children who would have regularly attended the playground, who have been at home throughout lockdown, without play resources and their usual regular opportunity to play freely outdoors.”

“We are pleased to be partnering with London Play this summer. The partnership will extend the Summer of Play project at Max Roach to enable play parcels to reach 100 vulnerable children unable to access our reduced play service due to Covid-19 group restrictions.”

Hundreds of children will have the chance to learn about the natural world– and get muddy – at an urban ‘oasis’ in south London.
Read More

FIND A PLACE TO PLAY

Click here to go to our play map and find adventure playgrounds, play streets and all our other favourite places to play in London.
VISIT OUR PLAY MAP